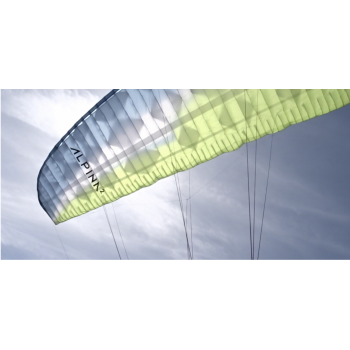 The Alpina 2 is based on the Delta 2, but weighs 800g less! The Alpina 2 retains the comfort, safety and ease of use of the Delta 2 but increases the overall performance, fun and handling in a lightweight package. Suitable for Sport Class pilots who are looking for a light weight wing with uncompromised performance. The Alpina 2 is for serious adventures and XC missions in real conditions anywhere on earth.

Our mission was to provide serious Vol-Biv pilots with the same legendary performance and comfort of the Delta 2, in a package that is light and low-volume enough to carry into the biggest mountains on earth. This wing has directly benefitted from the technological gains made in the OZONE Performance Project and more than ten years of lightweight paraglider R&D. OZONE’s research in light wing construction began with the Peak in 2001, continued during the first ever X-Alps race in 2003 and in every subsequent race since. Features that appear in the design of the Alpina 2 helped pilots to sweep the top five places in the 2013 RBXA race. The Alpina 2’s SharkNose profile is solid at accelerated speeds and extremely resistant to spin and stall. It provides a more constant internal pressure in turbulent air, increasing passive stability and creating an even more comfortable and stable feel in accelerated flight. The new profile has also improved the launch behaviour by reducing shooting in higher wind conditions.