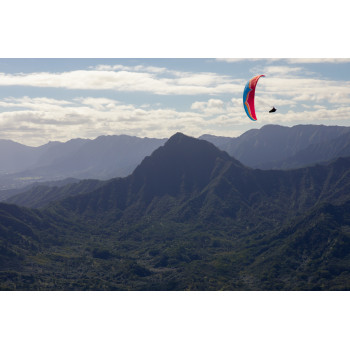 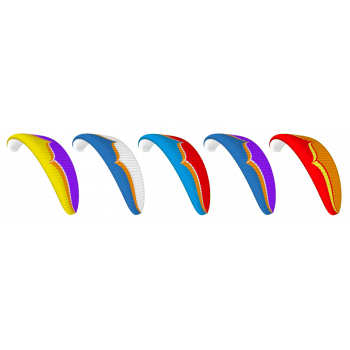 Swift 5
Based on the Rush 5 but 30% lighter, the Swift 5 is a top of class Lightweight Sport-PerformanceIntermediate wing that has been developed with the same technology used in our performance wings including the Enzo 3 and Zeno in addition to several new innovative features. Over fifteen years of lightweight R&D have allowed us to deliver a wing that is not only top of class in terms of performance, but one of the lightest wings in its class. Thanks to a lighter sail, the Swift 5’s agility and handling is improved over the Rush 5, with a more precise feel. Another key difference is the ease of inflation and take-off behaviour in general. Hundreds of hours test flying in real air and turbulent conditions have gone into the development of the Rush 5, ensuring the wing satisfies our own demanding requirements – real, usable performance in turbulent air throughout the speed range. The R&D team focused on the structural integrity of the wing to ensure an even more solid, compact and confidence inspiring glider compared to the Rush 4. The added structural solidity not only makes the wing more comfortable and fun to fly, it also Improves performance in turbulent conditions. Aspect Ratio has been maintained at a moderate level to ensure ease of use, fun and high levels of passive safety. Gains in performance have been made elsewhere with further optimisations of the line layout to reduce overall line drag and next generation triple 3D shaping for a clean, wrinkle free leading edge. The leading edge features innovative Opening Straps which help maintain the shape of the cell openings during accelerated flight, reducing flutter and the associated drag it creates. Modifications to the shaping of the panels and construction of the trailing edge mini ribs have also contributed to further reductions in parasitic drag. The Rush 5 features a new optimised Shark Nose profile, not only does this add stability, comfort and performance, it also adds a forgiveness to the brake range – the wing is extremely resistant to accidental spin or stall. The R&D team spent a lot of time concentrating on the handling, optimising the way the wing feels and turns. We wanted a wing with a direct linear progression in the first part of the brake range whilst being responsive and forgiving in the second part. This characteristic makes the wing extremely efficient in the climb, flat turns with minimal amounts of brake input allows the wing to climb well in lighter lift whilst the responsiveness in the second part enables the wing to react instantly to commands making it easier and more pleasurable to maintain roll and bank angles in the stronger cores. Combining sporty, dynamic handling, great top speed and high levels of passive safety in a comfortable and lightweight package, the Swift 5 is suitable for a wide range of pilots. Although certified EN B, it is not suitable for beginner pilots or those under training, but it is ideal for intermediate pilots and experienced XC hounds who fly at least 50hrs per year.