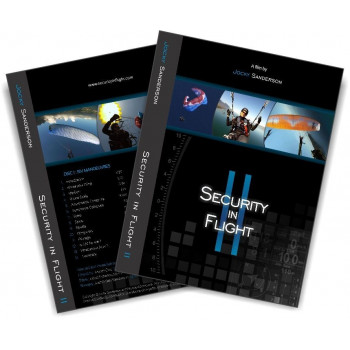 The original Security in Flight film was made in 1997 and is still being used worldwide.

It has helped thousands of pilots to become safer, better and thereby, more confident.

However, the rapid pace of evolution in glider design has created the need for a new comprehensive safety film showing the latest recovery techniques and safety guidance.

Released in November 2012 Security in Flight II has been designed to appeal to pilots of all levels.

It has been designed as an important reference video as opposed to a single-view paragliding film. Spread across 2 DVDs, with over 170 minutes of stunning footage, the film depicts manoeuvres in detail and demonstrates the subtlety and skill required to perfect glider contro.

Jocky Sanderson has been flying for over 25 years and uses his extensive knowledge and expertise to show what a glider can and cannot do.

He demonstrates how far you can push the glider to enable you to recognise and recover from problems that you may encounter during an XC flight.

With the aid of three high definition cameras, filming both real time and slow motion, you will be with Jocky throughout all of the manoeuvres, allowing you to observe precisely the techniques involved.

Security in Flight II is the definitive word on paraglider flight control..