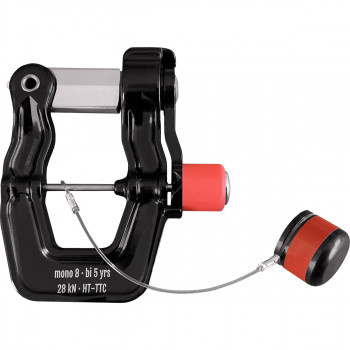 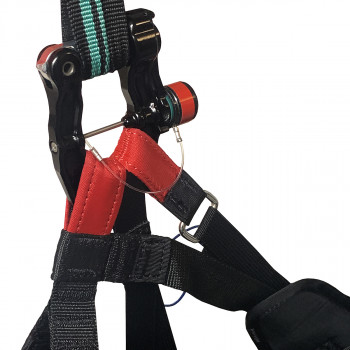 The Finsterwalder PARALOCK is a paragliding carabiner with convenient handling and long replacement interval for mono and tandem use.

With a conventional paragliding carabiner, separation under load is hardly possible. However, in certain situations this can not only be useful but even life-saving - e.g. when landing in moving water or in strong winds. Also after an emergency parachute deployment, it may be necessary and in any case recommended to disconnect the paraglider. The PARALOCK eliminates the need to carry a line cutter or to pull in the paraglider which costs valuable time.

The PARALOCK's separation function is also useful in other sports, for air and water rescue, and in parachute harnesses.

Easy operation even with gloves: After inserting the paraglider risers, the PARALOCK locks and secures itself automatically. The carabiner is opened by a 120° turn of the release lever against spring force, whereby the lever can only be unlocked after a button is pushed.

A security cap over the release button reliably prevents the PARALOCK from being opened unintentionally.

Video: Separation of the paraglider after an emergency parachute deployment

According to the LTF, the maximum allowed sink rate for paraglider rescue systems is 6.8 m/s, corresponding to 24.5 km/h. However, many pilots are not aware that in the reserve parachute certification process, the sink rate is determined without the paraglider. Interactions between paraglider and rescue system can increase the sink rate substantially – for example, by increased swinging or due to a resulting shear position. The risk of injury increases accordingly.

Although modern reserve parachutes usually reach maximum sink rates of “only” 5.5 m/s, corresponding to approx. 20 km/h, these values are often only achieved by a lateral drift that generates lift. A paraglider that is not separated or only separated on one side impedes this drift and thus substantially increases the sink rate.

The possibility to choose the landing site with a steerable rescue system is a significant safety plus. If the main glider is not separated, this safety advantage is foregone.

It has shown that a separated paraglider usually collapses very quickly and that its salvage is easier. In the case of a tree landing, there is also a much lower risk of damage to the glider when it does not carry the full pilot weight.

The V-shaped belt chamber for the harness is designed to correspond to the pulling directions of the main risers and the back strap.

In some pod harnesses, the pod is attached separately (e.g. in the Advance Impress 4). The pod loops can be inserted above the harness chamber separating screw.

Axle and locking bolt made of hardened chrome steel

Replacement interval: 8 years with unlimited flight hours, 5 years for tandem paragliding use and use in hang gliders