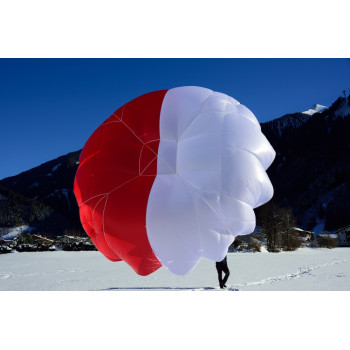 The AirDesign DONUT rescue system combines the positive characteristics from both square and annular (round) rescues.

The DONUT is cut like a square canopy, but in the air presents more like that of a traditional annular.
Subsequently, packing is still as simple as with conventional round rescue systems.
In many drop-tests, we simulated real-life flight behaviour.
The DONUT maintains its demonstrated safe and stable characteristics, even after repetitive tests and water landings.
The DONUT’s revolutionary design provides fast opening times, and its four centre lines create a higher projected surface, resulting in low sink values.
Side vents (technical drawing) make the rescue impressively oscillation stable.
Due to the new design concept, we were able to reduce the total amount of material utilised compared to a conventional round rescue, placing the DONUT in the standard light rescue weight range.